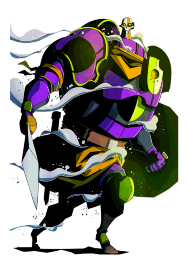 A century after the rout of the Rhynn factions, the legend of Sir Dagger is still intact and all those who know the truth are dead. But with dimensional rifts now appearing all over the city, a Hive temporal explorer wanted to unravel the mystery.... Sir Dagger, whose skeleton alone remains, is therefore taken out of his crypt and transported to modern times. Back on his feet, thanks to advanced cybernetics, he now sets out on the road to permanently wipe out the descendants of the necromancers who sullied his legend!