This website is free to access which is made possible by displaying online advertisements to visitors. Please consider supporting the site by disabling your ad blocker or whitelisting the website. If you see any inappropriate ads, please feel free to contact me. Learn more here. 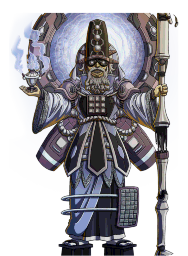 Although Pere Barali officiated as Sakrohm for years to hide from the Oculus, the Oblivion's principles have nothing to do with alien beliefs. Barali doesn't pray to the Glibon or any other God for that matter. He believes in a form of Illumination that allows the Oblivion to mimic not only their fellow beings’ appearences, but also their feelings - an ancient and forgotten form of magic that, when it still existed, was called empathy by the inhabitants of Clint City... Since his clan has been back together, Barali trains Tyres, whose crazy project is to master several Illuminations in a row.