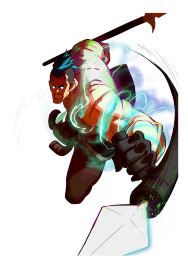 Who is #Kassar? The powerful warrior of the forgotten people? One theory is that he wasn't just a mere laborer on the post-Mechakolos reconstructions sites, and that instead, he used his powers of transformation to take on the appearance of the #Oblivion leader. Another rumor doing the rounds paints him as a drifter who trained with several different clans such as the #Fang Pi Clang and the #Paradox. And others think he's actually #Tyres' brother and determined to get to the bottom of his people's genocide! Are they all right or all wrong? One thing’s for sure: he shapeshifts on a regular basis to increase his corpulence and when he does, he sure hits hard!