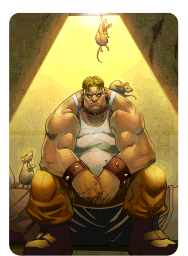 Brother to the great #Evlyn Meycry, #Sixx Meycry has always been seen as something of a failure by his nearest and dearest. Unable to use his demonical force, he decided to fly the family nest and prove to them he could fend for himself. While making a stop-off at the Red One Motel, the imposing Sixx passed out on his bed without having any idea of just what he was inhaling in his heavy sleep... The next day, he woke up and realized that physically speaking he had become quite "something else". The cocktail of Xantiax and his genetically powerful abilities have now made him the ideal candidate for the crazy #Berzerk crew!