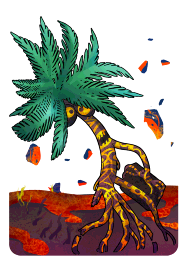 There's an ecosystem of tidal swamps that only form in the intertidal waters of low-lying coasts in tropical regions. Originating from the largest mangrove on the Komboka islands, this plant came into being during the last volcanic eruption, as if by magic… Fascinated by it, the warriors soon took Rhizom under their wing. For Rhizom, scarred for life by the effect of the incandescent lava on his feet/roots, flinging away anything that dares brush up against him has become a reflex! So, here comes Rhizom, the Komboka plant catapult!