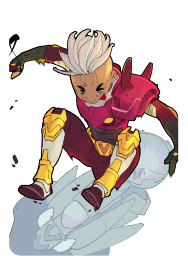 Once he had grown up and been fully trained in the empire’s warring ways, young Balixto could easily have gone on to become the new head of the Vortex clan. But the young prince had other ideas…such as leaving the court to head for the battle field and confront the Dominions not far from Orphanwood! But to make this dream come true, he was going to have to trade his little slingshot for another propulsion weapon: a catapult even more powerful than #Sir Lambda’s!