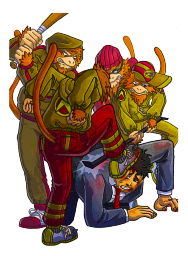 It’s well known that there’s strength in numbers. Moreover, do they not say that there’s strength in unity? This is even more true when you’re a young marmoset in Clint City zoo, surrounded by animals weighing several tons a piece. The #Bros would never go looking for trouble on their own, but once they get together, it’s a totally different story… Theft, tobacco smuggling, illegal trafficking, they’ll dabble in just about anything. All in all, they’re a bunch of pretty savvy, well-organized thugs. Some even think they’re on the bottom rung of the mafia, controlled by the very dangerous #Sobek.