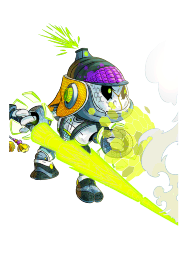 As a child, Oon was fatally injured by the Vortex, which was why he was the first subject in #Lumia’s experiments to transfer human thought into an artificial body. But the only body available at the time was a prototype… This first transfer was a huge source of information for the development of the "artificial" project. For example, Oon still saw himself as the little knight in his favorite story book, which made #Lumia realize that the transfer did not alter the mind but rather strengthened it!