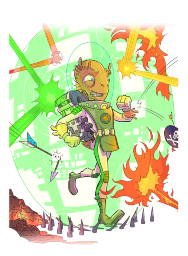 Baka was a crew member and scavenger of the galaxy pirates. This task was the most invidious of all since a scavenger's role was to act as a dispendable scout required to test the defences of any spot the captain of the vessel set his sights on. His good and bad luck had turned him into something of a legend among the ship's company. This, Baka owed to his ability to trigger off every single death trap in the area and make it out in the one piece, though it is unclear how. Upon entering a lost mausoleum Baka came across a strange cube that opened into a dark hole and transported him to the Sakrohm temple. The little alien, delighted at first at having escaped from his thankless task, quickly faced disenchantment: his coming had been prophesied by Tara who handed him over to Belmundo. The latter then entrusted him with the mission of finding the map that would lead to the place of rebirth of the Great Dashra Sakrh. Off he goes on yet another series of suicidal tasks with the foul-smelling flabby smuggler to keep him company. Ugh!