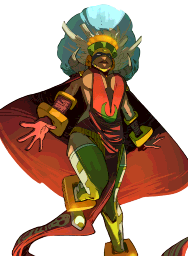 Among the many varied religions in Los Santos, the members of the forgotten Temple of the Moon were attempting a comeback. Placing their faith in one of their prophecies that said to follow the tracks of the Sun virgins, they decided to conquer the Huracan ring. To this end, for several years young priestesses were trained in the subtle art form of the lucha libre. The priests then decided to organize an internal tournament on the top of their pyramid to establish who the best fighter to represent them would be... The chosen Daughter of the Moon, baptized Mama Killa, set off for the Pile Tower on the day of the solstice, heralding in the ring and in the Temple of the Moon calendar, the start of a new age for their silver divinity, with her superhuman agility.