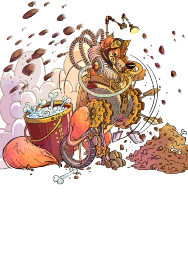 Everyone in Riotpolis knew Argos, the stray dog. Despite his appearance, this little doggy was probably the bravest creature in town and a hero to boot! He’d saved a young #Reeplay from very nearly being crushed, rescued baby #Lindsey after her motorised pushchair spun out of control and fished little #Octana out of a drilling well. On more than once occasion, this brave little dog had literally sacrificed life and limb for the people of Riotspolis who always did all they could to replace the limbs he’d so heroically forsaken. In fact, during the last landslide Argos’s days would have been numbered had Pericles himself not gone back down to pull the animal out from under the rubble. Then, deciding to adopt him, the Patriarch named him honorary citizen of the town and arranged a wonderful retirement for him within the Alma Mater.