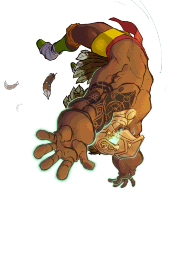 Pedro got off to a rocky start in La Lucha. Graduating bottom of his class in Noctezuma's prestigious wrestling school and then going on to become a pro in consecutive losses, he had turned into the whipping boy of the Los Santos wrestling ring. After two years of this he was very close to giving up all hope of ever becoming a professional luchador when destiny knocked on his door in the form of a wise old woman who gave him the ancient mask of the mythical Tekumman! Pedro’s rapacious shapeshifter of infinite potential was awakened and the willpower of the ancient hero pumped through his veins… When he next entered the ring after his new training session, he sent his opponent flying. And nowadays, Pedro "Tekumman” is one of Noctezuma’s favorite champions, combining aerial grace with the potency of a predator.